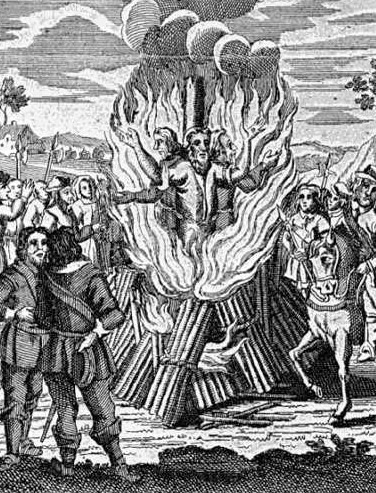 In the Middle Ages burning was used both as a form of torture and as a capital punishment.

As a form of torture the victims feet could be held to a fire, or trapped into metal boots that were heated up, or they could be strapped into an iron chair with a fire lit underneath, or red hot irons could be applied. Metal torture instruments were often heated – pincers, pliers and so on. Burning or molten liquids could also by used, the victims being forced to dip limbs in them or even having them poured down their throats.

As a form of capital punishment, burning has a long history for crimes such as treason (heresy, blasphemy and witchcraft being regarded by the Christian Churches as treason against God). Sodomy was also punished by burning alive, again because it was seen as a crime against God.

If the fire was large (for instance, when a large number of prisoners were executed at the same time), death often came from smoke inhalation or carbon monoxide poisoning before flames actually caused harm to the body. If the fire was small, however, the convict would burn for some time until death from heatstroke, shock, loss of blood or the thermal decomposition of vital body parts. Several records report that victims took over 2 hours to die. In many burnings a rope was attached to the convict’s neck passing through a ring on the stake and they were simultaneously strangled and burnt.

When this method of execution was applied with skill, the condemned’s body would burn progressively in sequence: calves, thighs and hands, torso and forearms, breasts, upper chest, face before death intervened. When the Catholic Inquisitions burned people they generally ensured a good distance between the flames and the victim, so that he or she was actually roasted to death rather than burned to death.