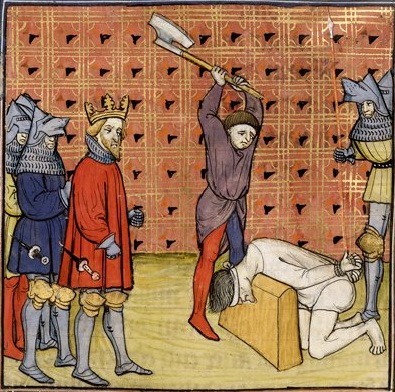 Decapitation by sword or axe was considered the „honourable“ way to die for a noble, who, being a warrior, could often expect to die by the sword in any event. In England it was considered a privilege of noblemen and noblewomen to be beheaded. Others suffered a dishonourable death death on the gallows or through burning at the stake. In medieval England the penalty for treason by men was to be hanged, drawn, and quartered. The penalty for women traitors was to be burned at the stake. In practice sentences of nobles were almost always commuted to beheading. In legends of Christian martyrdom the fictitious saints withstood all attempts to execute them, until the wicked heathens finally beheaded them.