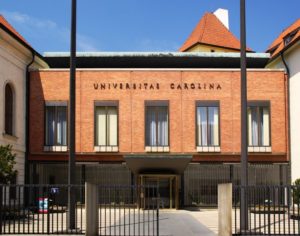 The Karolinum is a complex of buildings located in the Prague Old Town. Karolinum, the seat of the Charles University,  is one of the oldest dormitores in Central Europe.

The foundation of Charles University(Karlova univerzita)on 4 April 1348 counts among the most significant statesmanlike deeds of Charles IV. In a foundation charter he declared that he had established the university so that the inhabitants of the Bohemian Kingdom would not need to beg for alms abroad, could find the feast of knowledge at home and to the contrary could invite foreigners to study in our country. At first, the university did not have a central building. Students lived at their professors’ and also ate with them. The lectures took place in churches, monasteries and also in private. Later various university colleges were established and Karolinum was only one of them. Charles College (Karlova kolej) was founded in 1366 and after twenty years moved into a Gothic patrician house of the mintmaster Rotlev from the year around 1350.

The architectural shape of Karolinum changed significantly during its history. In the early 18th century, it was rebuilt in a Baroque style, according to the plans of the architect František Maxmilián Kaňka. From 1879 to 1881, several parts of the building were rebuilt in the Neo-Gothic style by the architect Josef Mocker.

Karolinum is a National Cultural Monument of the Czech Republic.