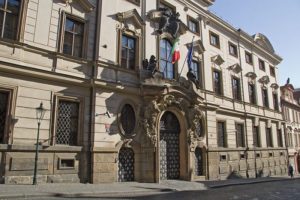 The Clam-Gallas Palace is a Baroque palace in Prague Old Town which was built in 1714–18 by the italian architect Domenico Canevale. During the rest of the 18th century Jewish balls and concerts were held in the palace, and were attended by noteworthy artists including Mozart and  Beethoven.

The Prague City Archive was placed in the Clam – Gallas Palace later and at the present time there are exhibitions and concerts held in the palace halls.