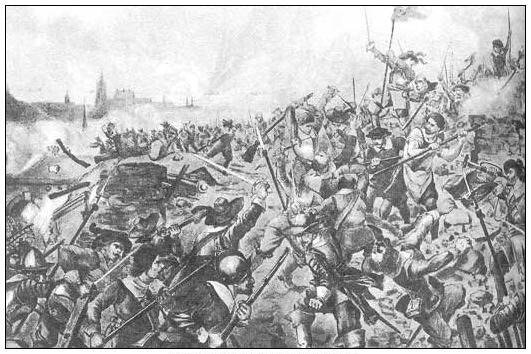 The Thirty Years’ War was a war fought primarily in Central Europe between 1618 and 1648. One of the most destructive conflicts in human history. It resulted in eight million fatalities not only from military engagements but also from violence, famine and plague.

Initially a war between various Protestant and Catholic states in the fragmented Holy Roman Empire, it gradually developed into a more general conflict involving most of the European great powers.

The Thirty Years’ War devastated entire regions, resulting in high mortality, especially among the populations of the German and Italian states, the Crown of Bohemia and the Southern Netherlands. Both mercenaries and soldiers in fighting armies traditionally looted or extorted tribute to get operating funds, which imposed severe hardships on the inhabitants of occupied territories. The war also bankrupted most of the combatant powers.

The Dutch Republic enjoyed contrasting fortune. It ended its revolt against Spain in 1648 and subsequently enjoyed a time of great prosperity and development, known as the Dutch Golden Age during which it became one of the world’s foremost economic, colonial, and naval powers. The Thirty Years’ War ended with the Treaty of Osnabrück and the Treaties of Münster part of the wider Peace of Westphalia. The war altered the previous political order of European powers. The rise of Bourbon France, the curtailing of Habsburg ambition, and the ascendancy of Sweden as a great power created a new balance of power on the continent, with France emerging from the war strengthened and increasingly dominant in the latter part of the 17th century.