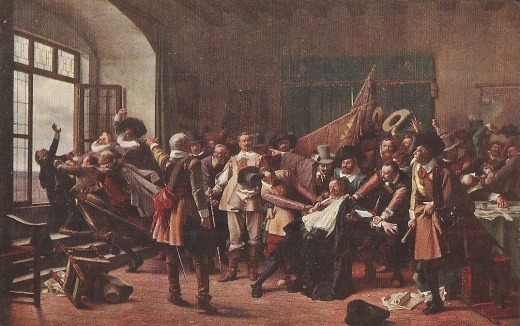 The Second Defenestration of Prague precipitated the Thirty Years’ War.

On May 23, 1618, four Catholic Lords Regent, Count Jaroslav Borzita of Martinice, Count Vilem Slavata of Chlum, Adam II von Sternberg (who was the supreme burgrave) and Matthew Leopold Popel Lobcowitz (who was the grand prior), arrived at the Bohemian Chancellory at 8:30 am. After preparing the meeting hall, members of the dissolved assembly of the three main Protestant estates gathered at 9:00 am, led by Count Thurn, who had been deprived of his post as Castellan of Karlstadt by the Emperor. The Protestant lords’ agenda was to clarify whether the four regents present were responsible for persuading the Emperor to order the cessation of Protestant church construction on royal lands. According to Martinice himself: Lord Paul Rziczan read aloud… a letter with the following approximate content: His Imperial Majesty had sent to their graces the lord regents a sharp letter that was, by our request, issued to us as a copy after the original had been read aloud, and in which His Majesty declared all of our lives and honour already forfeit, thereby greatly frightening all three Protestant estates.

Immediately after the defenestration, the Protestant estates and Catholic Habsburgs started gathering allies for war.