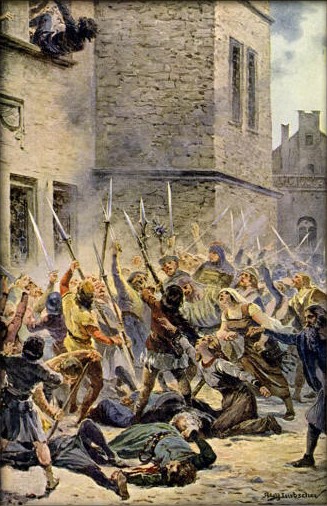 The defenestrations of Prague were two incidents in which multiple people were defenestrated (that is, thrown out of a window). The first occurred in 1419, and the second in 1618, although the term “Defenestration of Prague” more commonly refers to the second. Each helped to trigger a prolonged religious conflict inside Bohemia (the Hussite Wars, 1st defenestration) or beyond (Thirty Years’ War, 2nd defenstration).

The First Defenestration of Prague involved the killing of seven members of the city council by a crowd of Czech Hussites on 30 July 1419. Jan Želivský, a Hussite priest at the church of the Virgin Mary of the Snows, led his congregation on a procession through the streets of Prague to the New Town Hall on Charles square. The town council members had refused to exchange their Hussite prisoners. While they were marching, a stone was thrown at Želivský from the window of the town hall and allegedly hit him. This enraged the mob and they stormed the town hall. Once inside the hall, the group defenestrated the judge, the burgomaster and several members of the town council. They were all killed by the fall.

The First Defenestration was thus the turning point between talk and action leading to the prolonged Hussite Wars. The wars broke out shortly afterward and lasted until 1436.