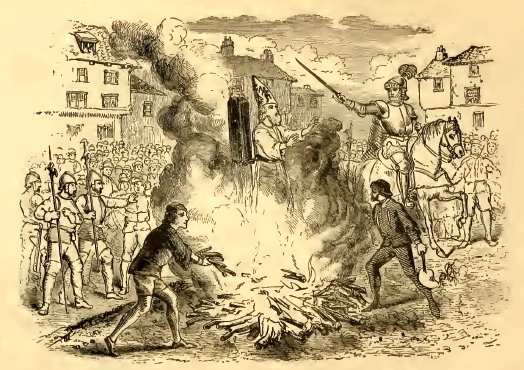 Jan Hus was a Czech theologian, Catholic priest, philosopher, master, dean, and rector of the Charles University in Prague who became a church reformer, an inspirer of Hussitism a key predecessor to Protestantism and a seminal figure in the Bohemian Reformation.

King Wenceslaus‘ brother Sigismund of Hungary was anxious to put an end to religious dissension within the Church. To put an end to the papal schism and to take up the long desired reform of the Church, he arranged for a general council to convene on 1 November 1414 at Constance. Jan Hus willing to make an end of all dissensions, agreed to go to Constance under Sigismund’s promise of safe conduct.

At the place of execution, he knelt down, spread out his hands, and prayed aloud. The executioner undressed Hus and tied his hands behind his back with ropes, and bound his neck with a chain to a stake around which wood and straw had been piled up so that it covered him to the neck. At the last moment, the imperial marshal, von Pappenheim, in the presence of the Count Palatine asked Hus to recant and thus save his own life. Hus declined thus:

God is my witness that the things charged against me I never preached. In the same truth of the Gospel which I have written, taught, and preached, drawing upon the sayings and positions of the holy doctors, I am ready to die today.

Hus‘ ashes were later thrown into the Rhine river (as a means of preventing the veneration of his remains).