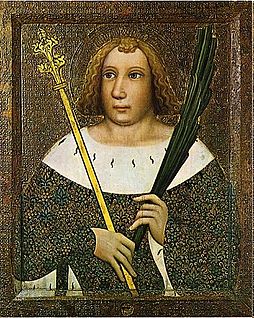 Saint Vitus according to Christian legend was a Christian Saint from Sicily. He died as a martyr during the persecution of Christians by co-ruling Roman Emperors Diocletian and Maximian in 303. Vitus is counted as one of the 14 Holy Helpers of medieval Roman Catholicism.

Vitus is considered the patron saint of actors, comedians, dancers and epileptics similarly to Genesius of Rome. He is also said to protect against lightning strikes, animal attacks and oversleeping.