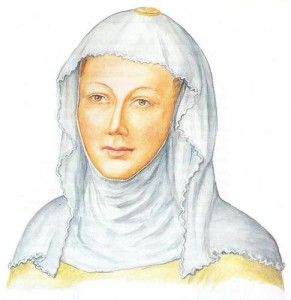 Saint Ludmila is a Czech saint and martyr venerated by the Orthodox and the Roman Catholics. She was born in Mělník as the daughter of the Sorbian prince Slavibor. Saint Ludmila was the grandmother of Saint Wenceslaus  who is widely referred to as Good King Wenceslaus.

Ludmila was married to Bořivoj I of Bohemia, the first Christian Duke of Bohemia in 873 and they had a son Spytihněv.

Wenceslaus‘ mother Drahomíra became jealous of Ludmila’s influence over Wenceslaus. She had two noblemen murder Ludmila at Tetín, and part of Ludmila’s story says that she was strangled with her veil. Initially, Saint Ludmila was buried at St. Michael’s at Tetín.

Veneration of the saint, who was canonized shortly after her death, grew rapidly, and she was honoured (together with her grandson Václav, subsequently murdered by his half-brother Boleslav the Cruel) as one of the patrons of Bohemia, as well as of widows, converts, duchesses and (not surprisingly) those experiencing difficulties with in-laws. Her fame spread far beyond Bohemia throughout the entire Slavonic world, where her name is still highly popular among both Orthodox Christians and Roman Catholics.