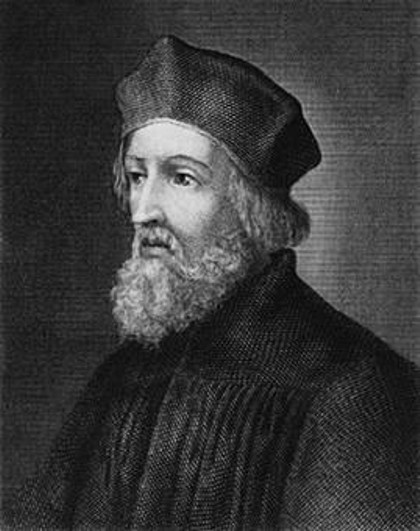 Jan Hus was a Czech theologian, Catholic priest, philosopher, master, dean, and rector of the Charles University in Prague who became a church reformer, an inspirer of Hussitism a key predecessor to Protestantism and a seminal figure in the Bohemian Reformation.

After John Wycliffe he theorist of ecclesiastical reform, Hus is considered the first church reformer, as he lived before Luther, Calvin and Zwingli. His teachings had a strong influence on the states of Western Europe, most immediately in the approval of a reformed Bohemian religious denomination and  more than a century later, on Martin Luther himself. He was burned at the stake for heresy against the doctrines of the Catholic Church including those on ecclessiology, the Eucharist and other theological topics.

After Hus was executed in 1415, the followers of his religious teachings (known as Hussites) rebelled against their Catholic rulers and defeated five consecutive papal crusades between 1420 and 1431 in what became known as the Hussite Wars.