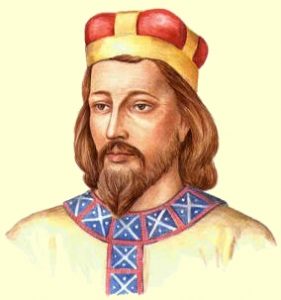 Saint Wenceslav I or Václav the God was the duke of Bohemia from 921 until his assassination in 935. His younger brother Boleslaus the Cruel, was complicit in the murder.

His martyrdom and the popularity of several biographies gave rise to a reputation for heroic goodness that resulted in his elevation to sainthood. He was posthumously declared to be a king and came to be seen as the patron saint of the Czech state.

Wenceslaus was the son of Vratislous I,  Duke of Bohemia from the Přemyslid dynasty and Drahomíra who was the daughter of a pagan tribal chief of the Havelli but was baptized at the time of her marriage.

In 921, when Wenceslas was about thirteen, his father died and his grandmother Ludmila of Bohemia became regent. Jealous of the influence that Ludmila wielded over Wenceslas, Drahomíra arranged to have her killed.

In September 935, a group of nobles allied with Wenceslas’s younger brother Boleslav plotted to kill him.